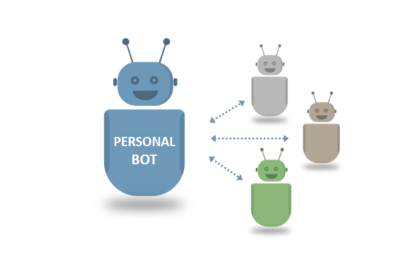 01.12.2021 |
For a long time, “Do it yourself” (DIY) was the guiding principal in customer service. But customers are getting tired of it. Experts are sure that the trend is shifting toward “Do it for me” (DIFM). In this article, we point out what personal bots have to do with this and why we are on the way to a bot economy.

The Transformation of Self-Service

The autonomy of doing something yourself – that is the basic principle of self-service. This also applies to customer self-service: Users receive answers to their questions or can configure settings – at any time, regardless of business and service hours. DIY, the simple and uncomplicated way of solving one’s own problems independently, meets the taste of end consumers: In 2014, the percentage of self-service use on websites was already 76%, according to a study by Forrester. Another noticeable aspect at that time was the increasing use of virtual agents for self-service. Here, usage grew from 28% in 2012 to 58% in 2015, with voice self-service being used in 55% of cases.

The early trend of intelligent virtual assistants (IVA) and voice interfaces is expected to continue. For example, IVAs in form of chat and voice bots are now widespread and, thanks to continuous technical development, already much more intelligent than they were 5 years ago. And that’s just the beginning. Anthony Mullen, Senior Research Director at Gartner, predicts a bright career for virtual assistants: “The trend of customers assigning their endless digital activities to their virtual personal assistants (VPAs), chatbots and other self-service tools will grow over the next 10 years.”

The fact that tasks will increasingly be handed over to bots in the future shows a change in self-service behavior: classic DIY is being replaced more and more by a new variant – “I do it for you”; also called “Do it for me” (DIFM). According to Digital Expert Peter Kabel, DIFM is “the new normal.” Today, customers are often annoyed when they have to fill out forms on their own, for example. It’s more convenient to delegate this to IVAs. The integration of artificial intelligence and mobile apps into our everyday lives has driven this development immensely.

Mullen draws four possible scenarios for the future of self-service:

These range from “Do it myself” and “Do it together” – self-service in the classic sense and with human support from a service employee – to “Let my bot do it,” which is equivalent to using a virtual assistant. The fourth stage draws the most interesting scenario: “Let our bots do it”.

In future, instead of delegating each task to a specific service bot, it will be the case that bots will do this among themselves.

“For the moment, the state of the art of bots is bot-to-consumer, meaning bots communicating with humans. But at some point soon, bots will start talking to other bots. Enter the bot-to-bot era.”
Niko Nelissen, Founder of blendr.io, via VentureBeat

Nelissen was already speculating about the development of the future bot landscape in 2016. He predicted a change from classic bot-to-consumer communication to a bot-to-bot era in which dialogs are held from machine to machine. Only in the final step will there be a transmission to the end consumer – Nelissen calls it a Bot-to-Bot-to-Consumer communication. 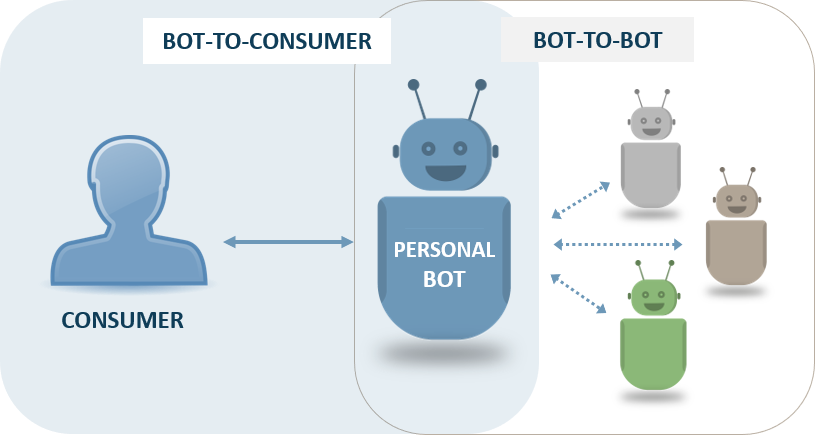 This is where the so-called personal bots come into play. In a concrete use case, this could look like this: A reservation is to be made for a trip from Cologne to Berlin. In addition, a hotel room is to be booked in Berlin. Instead of starting an individual booking request for each service – trip and hotel – the customer contacts a bot – his personal bot. The customer’s bot is called Paul. Paul now contacts Deutsche Bahn’s virtual assistant to book a suitable rail ticket. Afterwards, Paul “talks” to a booking bot, which determines an available hotel room in Berlin. Once both bookings have been successfully completed, Paul informs the end user.

“[In future] you will have a service bot, your personal bot, that you talk to and that controls the other bots.” (translated from German)
Sven Gábor Jánszky in the Voice AI webinar

Sven Gábor Jánszky, Chairman of the futurology institute 2b AHEAD ThinkTank, also shares the vision of a personal service bot that takes over communication with other bots. During a webinar, he spoke with Peter Kabel about Voice AI and Bot Economy. Bots that do business with each other, make bookings or perform other services are also a realistic vision for Kabel. However, the question is how the individual bots will communicate with each other in the future: Via natural language or via APIs? Both are possible scenarios. It is important that systems are opened up for bots. Companies’ systems must be configured in a way that allows bots to access them and start actions. If this is not the case, companies will not be able to keep up in the approaching bot era. A changeover must take place now, before it is too late.

Integrate virtual assistants into your customer service and provide your customers with self-service solutions at the highest level – both in chat and by phone via voice interface. Thanks to the open API structure, a connection to third-party systems is possible without any issues.